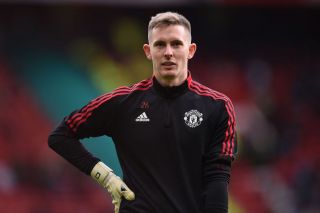 Manchester United shot-stopper Dean Henderson is on the verge of completing a move to Nottingham Forest, it has been reported. The 25-year-old failed to make a single Premier League appearance last season and is now set to leave the club.

Henderson ended the 2020/21 campaign as Ole Gunnar Solskjaer’s first-choice goalkeeper but injuries swallowed his preparations for the following campaign, resulting in just three appearances all season – one in each cup competition.

Now, it’s being reported that United and Nottingham Forest are progressing in talks over the goalkeeper, with completion said to be close.

That’s according to The Athletic, who add that deal is likely to be a loan and it’s yet unclear whether it will include an option or obligation to buy at the end of the season.

Although an agreement is yet to be reached, it’s claimed that there is positivity from both clubs and Henderson is happy to join the newly-promoted side.

Steve Cooper, who was appointed Nottingham Forest manager one month into last season, guided the club back to the Premier League and also helped develop James Garner, who is expected to take part in pre-season under Erik ten Hag.

SN’s verdict…
David de Gea’s stocks at Manchester United rose last season, with the goalkeeper stealing most of the plaudits for his efforts after several disappointing years. Earlier this month, he was crowned Players’ Player of the Year.

It was always going to be tough for Henderson to break into the side again and if his two years at Sheffield United are anything to go by, Forest are signing a talented goalkeeper.

Should the move be completed, Henderson would become the second goalkeeper to leave United this summer, with Lee Grant due to depart upon the expiry of his contract later this month.

Tom Heaton, who was signed as a free agent last year, has been tipped to be promoted to second choice. It remains to be seen whether United make a move for a new goalkeeper.