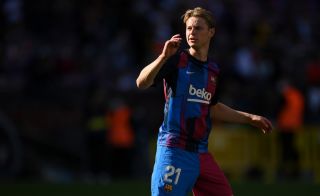 The 25-year-old is Barcelona’s most valuable asset and the Catalan club’s financial situation could force them into a sale, with United looking to take advantage.

Nemanja Matic, Paul Pogba, Jesse Lingard and Juan Mata have all confirmed they will be leaving upon the expiry of their contracts later this month and that has left United light in midfield.

Ten Hag is believed to be keen to reinforce that area of the pitch, with De Jong, with whom he spent 18 months at Ajax, earmarked as his first-choice target.

According to The Athletic, Manchester United and Barcelona are ‘engaged in a game of poker’ as they continue to negotiate for the player’s sale, with De Jong said to be open to a move.

As per the report, the two clubs are €10-15m apart in their valuations of De Jong but well-placed sources have indicated that the deal will eventually get done.

SN’s verdict…
Manchester United fans are growing increasingly frustrated with the lack of movement from the club. United’s main rivals have moved quickly to secure their prime targets but United are still tip-toeing in the market.

Undoubtedly, De Jong would be a quality addition but one must ask whether the €10m difference in valuation is worth risking Ten Hag’s pre-season preparations.

Ideally, he would like De Jong to sign sooner rather than later, with the Dutchman set to drill his players this summer. Furthermore, the Premier League season begins earlier than usual, meaning that pre-season will also be shortened – offering the manager less time to clue in his players.