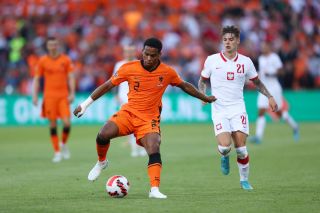 Since Erik ten Hag’s appointment earlier this year, there has been a spike in reports linking the club with Dutch players. Ajax defender Jurrien Timber is one of the players most frequently paired with a move to Old Trafford.

The 21-year-old enjoyed a breakthrough season under Ten Hag this year and has also established himself as a regular under Louis van Gaal in the national team set-up.

He was thought to be one of Ten Hag’s prime targets this summer but United’s new manager has now been dealt a huge blow, as it appears that he will now be staying at Ajax.

That’s according to The Mirror, who say that Timber has informed Ten Hag that he will not be following him to Old Trafford this summer, with winning a place in this winter’s World Cup squad prioritised over a transfer. As per the report, the decision to reject a move to United has left Ten Hag stunned.

Furthermore, Louis van Gaal is said to have ‘spooked’ Timber by his comments earlier this month, when the former United boss suggested that joining the Old Trafford club could see him placed on the bench.

The news of Timber’s decision comes shortly after it emerged that Christian Eriksen, who is a free agent after signing a six-month deal with Brentford earlier this year, is likely to stay in London.

SN’s verdict…
Undeniably, Ten Hag would like to strengthen the squad as much as possible but he is now working with an unlimited budget and sorting out the midfield remains the number one priority.

Timber’s decision to stay at Ajax will come as a huge blow but should no defensive signings have been made by January, it’s likely that United will try to sign him again.

Earlier on Saturday, it was reported that Ten Hag was confident he could improve both Raphael Varane and Harry Maguire at the heart of United’s defence. That would offset the need to bring a defender in and United fans will be desperate for Ten Hag to succeed in that.