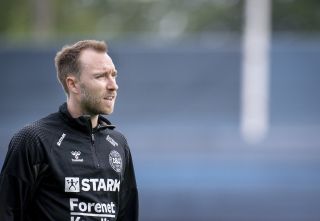 Erik ten Hag has made it clear that midfield reinforcements are needed at Manchester United this summer, with Barcelona midfielder Frenkie de Jong emerging as the first-choice candidate to boost that area.

Negotiations between Manchester United and Barcelona are believed to be underway, with the two clubs haggling over a transfer fee for the 25-year-old.

De Jong is not the only midfielder Ten Hag is keen on reuniting with, however, with Brentford’s Christian Eriksen emerging as a target in recent days.

Eriksen trained with Ten Hag’s Ajax last year when the midfielder was recovering from his devastating cardiac arrest and he’s now the subject of interest from United.

The Danish international is not believed to be an alternative to De Jong but another target rather – the pair could help fill the gaping hole left by several midfield exits this summer.

Tottenham Hotspur, Brentford and Newcastle are all believed to be interested in Eriksen, and now it’s being reported that he is ‘fairly likely’ to rejoin Spurs as he would prefer to stay in London.

That’s according to The Athletic, who add that it’s now a fight between Brentford and Tottenham to sign the 30-year-old, who is a free agent.

SN’s verdict…
Eriksen’s history with Antonio Conte can’t be forgotten here, with the Italian manager conditioning him into a new type of midfielder during their 18 months together at Inter Milan.

That could play on his mind as he chooses his next destination but losing the race to sign him would be a big blow to United, who are in desperate need of numbers in midfield. At the time of writing, Scott McTominay, Fred and Donny van de Beek are the club’s only senior midfielders.

Van de Beek has failed to impress since he joined the club two years ago whilst the other two have been underwhelming, although Fred emerged as last season’s surprise package.