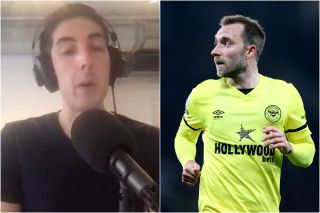 Barcelona are in a difficult financial situation and may be forced to cash in on their midfield star, with Erik ten Hag hoping to capitalise on that.

Brentford star Christian Eriksen, who has impressed since his cardiac arrest at last summer’s European Championship, is also a midfield target. Reports on Tuesday suggested that an offer has already been made to the Danish international, who is a free agent after signing a six-month deal with Brentford in January.

Claims that United were interested in Eriksen sparked debate among supporters on social media, with some arguing that the 30-year-old could be an alternative in the event that De Jong stays at Barcelona.

Those suggestions have now been rubbished by The Athletic journalist Adam Crafton, who provided an update on the situation earlier on Wednesday.

"Man Utd have presented an offer." 💰

“The situation is that Manchester United have presented an offer to Christian Eriksen and they’d like to sign him,” Crafton told Sky Sports, as seen above.

“I’m sure there’s lots of other clubs at the moment doing the exact same thing with Eriksen because he made a huge impression after coming back and going to Brentford.

“I know that Brentford would love to keep Eriksen at the club. I think there’s also been interest from Tottenham and Newcastle, I’m sure there will be interest from abroad as well.

“But Manchester United, you’d probably say are the biggest name club to have made an offer at this point. I don’t think he’s an alternative to Frenkie de Jong. United have lost a lot of midfield players already this summer – Paul Pogba, Nemanja Matic, Juan Mata.

“And they need to get some bodies in there so I think both De Jong and Eriksen are targets.”