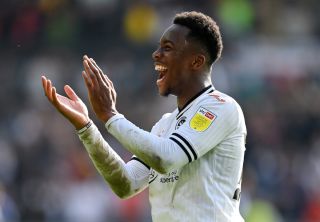 Erik ten Hag’s first pre-season at Manchester United is less than two weeks away, with the Dutchman set to assess his squad on June 27 ahead of their tour of Asia.

Ethan Laird is one of United’s promising youngsters hoping to impress Ten Hag this summer, having enjoyed a brilliant loan spell at Swansea in the first half of the 2021/22 season.

Laird endured a more challenging second half of the season as he joined Scott Parker’s Bournemouth, who eventually clinched promotion to the Premier League.

With right-back being a position very much still up for grabs at United, it’s now being reported that Laird is going to be offered the chance to impress his new manager in this summer’s preparations.

That’s according to the Manchester Evening News, who add that Ten Hag will monitor him this summer before making a decision on his future.

Laird is expected to be among the first group to report back to Carrington later this month, with United yet to make a full decision on his future. As per the report, Bournemouth hold an option to extend his loan for another season but are not expected to exercise that right.

SN’s verdict…
Several first-team stars will be reporting back to United in July due to their involvement in international fixtures, giving youngsters the chance to impress. Laird will definitely be one to keep an eye out for, with neither of United’s senior right-backs impressing over the last two years.

Laird has already made his senior debut for the site and will now hope to kick on as he approaches the final year of his contract.