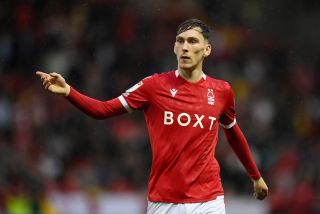 Manchester United are lighter in midfield than they have ever been in the Premier League era, with Scott McTominay, Fred and Donny van de Beek the only senior midfielders at the club.

Nemanja Matic and Paul Pogba’s departures, both on free transfers, have left a gaping hole in that area and Jesse Lingard and Juan Mata have also left.

That could work in James Garner’s favour, who has enjoyed a stellar campaign with Nottingham Forest. The 21-year-old has spent the last 18 months at Forest and was crucial as they won promotion back to the Premier League.

According to the Daily Mail, Ten Hag will offer him the chance to impress in this summer’s pre-season before making a decision on his future.

“That’s the plan. That’s what I’d like to do, go on pre-season and impress. It’s down to me as a player to impress him and hopefully make a mark,” Garner is quoted as saying.

“Before I went on loan, there were questions of am I physically ready to compete, to play first-team football, and I believe that I’ve shown that this season.

“Not only playing a lot of games but how I’ve held my own in such a tough league and men’s football, you know. I think I’ve shown that.

“I’ve not spoken to [Ten Hag] yet. I literally came from the play-off final straight to England, so I’ve had no rest, no break, just been football, football so I’ve not spoken to anybody at the club. It’s time for rest now and I’m not sure what the future holds.”

SN’s verdict…
United could do a lot worse than Garner in midfield. He has been absolutely integral to Nottingham Forest over the last 18 months and should United fail to land their prime targets this summer, Garner certainly fits the bill.

Should it be decided that another loan is the best way to move forward, it’s likely that Forest would be keen to bring him back to the club – a fitting solution for all parties.

As things stand, United’s midfield is weaker than it ever has been before and Garner will fancy his chances of breaking into the side. If he maintains the form he’s been playing at for Forest, staking his claim in the United side this summer should not be a problem.