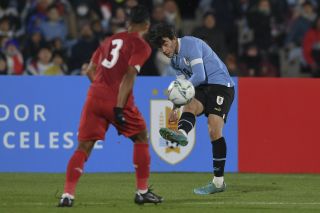 Facundo Pellistri will get the chance to impress Erik ten Hag on pre-season tour this summer.

That’s according to the Manchester Evening News, who claim another loan move has not been ruled out for Pellistri.

Once Ten Hag assess his performances up close, the new manager is expected to make a decision on the 20-year-old’s immediate future.

Pellistri has impressed on the international stage but has struggled for playing time at club level.

He joined Alaves on a season-long loan and got nowhere near the playing time he would’ve wanted last summer, therefore, it will go down as a wasted year in terms of his development.

Uruguay manager Diego Alonso has faith in the youngster and recently explained why he keeps selecting Pellistri, despite the fact he doesn’t play regularly at club level.

“I thought that the characteristics that Pellistri has could help us a lot with the game that we want to implement. From there, I told him what I wanted from him, what I did value in him and then the one who gave the rest was him.

“He came here when he was 20-years-old, he put on the starting shirt of the senior team and he played the way he played. That speaks much better about him than about me.”

It’s good news that he will get a chance to make an impression on Ten Hag – because that should be the case for every player, especially on day one.

Then it will be up to Ten Hag and his coaching staff to decide whether to keep him for next season.

This may come as good news for Amad Diallo, too. United don’t have many options on the right wing and I suspect at least one of those two to remain at the club for the forthcoming campaign.

Amad is another player who had an underwhelming loan spell last term. He didn’t get much of a look in at Rangers.