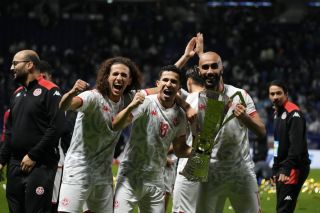 Tunisia won the Kirin Cup after a 3-0 win over hosts Japan, while Manchester United youngster Hannibal Mejbri came on as a second half substitute for the final 13 minutes.

The four-team tournament also consisted of Ghana and Chile but it was Tunisia that lifted the trophy.

It’s a first for Hannibal who lifted the maiden trophy in his fledging career after the full-time whistle.

He wrote via Instagram: “First trophy of my career with the national team, more to come.”

We certainly hope so – but at club level more than anything else.

Manchester United were quick to congratulate the 19-year-old on Twitter, as seen below.

Even though the Kirin Cup is considered a friendly tournament — and a stop gap as we wait for the winter World Cup — it’s great to see Hannibal taste success.

It should make him hungry to achieve it at United.

We would all like to congratulate Hannibal on winning the Kirin Cup.