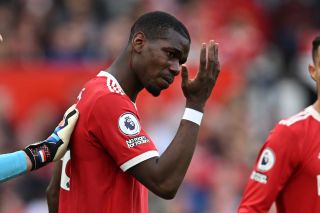 Manchester United midfielder Paul Pogba will officially leave the club at the end of this month but his Old Trafford nightmare could be coming to an end earlier than expected.

The 29-year-old has been the talk of most transfer windows since he joined the club in 2016 but after six disappointing years, his time at United is finally coming to an end.

Pogba last featured for United in April’s 4-0 loss to Liverpool and now, he’s set to complete a return to Juventus on a free transfer.

That’s according to Foot Mercato, who add that the France international has agreed to sign a four-year contract with the Turin club, the second time he departs Manchester on a free to join the Italian giants.

As per the report, Paris Saint-Germain and Real Madrid gradually lost interest in the midfielder and Max Allegri, the Juventus manager, has brought him in in a bid to improve the squad harmony.

SN’s verdict…
In truth, Pogba’s six-year stay at United has been uncomfortable for all parties. Pogba failed to endear himself to supporters and his relationship with the Old Trafford faithful was damaged beyond repair by the time his contract wound down.

It’s a bitter end for Pogba, for whom supporters had high hopes when United broke their transfer record to bring him back to the club.

His best stint came under Ole Gunnar Solskjaer but even then, he never impressed to the point where you thought he’d be a big miss if he left. Perhaps a departure came two years too late.