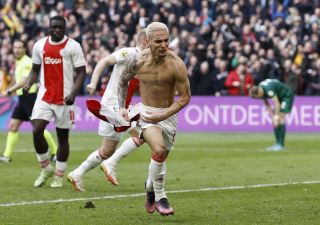 Manchester United have made initial enquiries to Ajax over winger Antony, who had a key role previously under Erik ten Hag, having been a regular in his side over the past two seasons.

According to Sky Sports, the two clubs have held talks over a deal for the player, but there is no mention yet of a bid being made to sign the Brazilian.

The report also states that United have prioritised signing a central midfielder as the club remain in talks with Barcelona to sign Frenkie de Jong.

We’ll know if United are serious about Antony if a bid is tabled this summer because the club will enquire about several players of the same profile.

The right winger is valued at £31.50m by Transfermarkt. but I can’t see United getting him for cheaper than £40m because he is one of the players Ajax will find most difficult to replace.

Since joining Ajax from Sao Paulo in 2020, Antony, has gone on to feature in 79 matches, directly contributing to 42 goals along the way.

However, Stretty News understands Matt Judge recently met with an agent to discuss the availability of a winger playing in the Premier League, but we highly doubt that player will be on the list of incomers this summer.

Let us know in the comments section how you think United will look in attack next season?