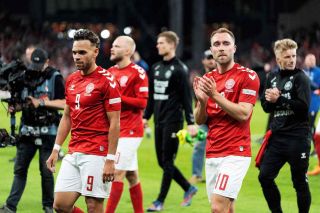 Christian Eriksen has reportedly turned down a contract extension at Brentford, with Manchester United in a two-horse race for the Dane after his agent held preliminary talks with Newcastle.

After suffering a cardiac arrest at Euro 2020 last June, the Denmark international left Inter Milan and decided to train at former club Ajax to prepare for a move back to the Premier League in January, joining newly-promoted Brentford on loan for the remainder of the campaign.

Eriksen proved that he is still a very good player in the Premier League and it would make sense for United to look at the option of signing him as a free agent this summer.

According to the Daily Mail, Eriksen has snubbed the opportunity to stay at Brentford.

This means Eriksen has opened the door to a move elsewhere and it has previously been reported that Ten Hag wants to maximise his transfer budget by bringing the midfielder to Old Trafford.

Furthermore, The Northern Echo‘s Chief Sports Writer, Scott Wilson, has another fresh update He claims Newcastle United have held preliminary talks with Eriksen’s entourage but now accept that, at this moment in time, the Red Devils and Tottenham are much likelier destinations for the Dane.

Eriken has the chance to play Champions League football if he returns to Tottenham, but does he want to be part of Ten Hag’s rebuild at United?

Sometimes it is better to think long-term.