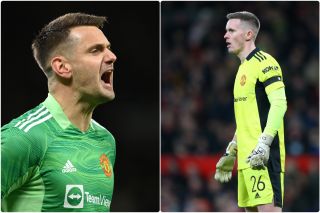 Dean Henderson and Tom Heaton don’t know where they will be playing next season.

Second choice goalkeeper Henderson is reportedly attracting interest from Bournemouth, while next in line, Heaton, is wanted by Middlesbrough.

That is according to the Daily Mail, who claim Heaton will stay at United if Henderson leaves.

Henderson, 25, spent the majority of last season as back-up keeper to David de Gea – having lost his place at the start of the season due to COVID-19. He never really got a chance after that because De Gea’s form improved enough to see him voted Fans’ Player of the Year.

Newcastle United have been touted as potential suitors, but a recent report from The Telegraph suggests a move to St James’ Park won’t be happening this summer.

The Sun has also linked Henderson with a move to Boro, but I don’t think he needs to drop down to the Championship anymore, especially after proving himself in the Premier League at Sheffield United.

He needs to be playing regular football next season. For his own sake.

Otherwise, it’s just a waste of development and I think United need to look at it that way too. The past 12 months were a total waste of time for Henderson – and, in hindsight, it was a mistake not to at least send him on loan in January when Newcastle came knocking on the door with interest in a loan deal.