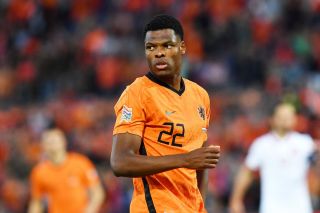 Erik ten Hag’s revolution at Manchester United is well underway and there has been a Dutch theme to reported transfer targets, with Barcelona midfielder Frenkie de Jong stealing most of the headlines.

United are believed to be in talks with Barcelona over a deal but other targets are also being pursued, with Christan Eriksen becoming the latest midfielder to be linked.

Darwin Nunez was also reportedly a target but the prolific forward is closing in on a move to Liverpool, with an official announcement expected to come imminently.

Jurrien Timber, the Ajax centre-back, has been strongly paired with a move to Old Trafford and according to reports, Ten Hag has now added another Dutchman to his wishlist.

That’s according to Goal, who claim that Inter defender Denzel Dumfries is the subject of interest from United as the club eyes to add competition on the right flank.

As per the report, Dumfries is seen as an ideal player for Ten Hag and the 26-year-old is one of the players under consideration, despite Diogo Dalot being told he will be given the chance to impress.

SN’s verdict…
Dalot was largely overlooked under Ole Gunnar Solskjaer but Ralf Rangnick’s arrival offered the Portugal international a new lease of life. He’s now the first choice in his position, which has fueled speculation over Aaron Wan-Bissaka’s future.

Dumfries is one of Inter’s few success stories in the last 12 months, with the Dutch international brought in to replace Achraf Hakimi. The former PSV captain exceeded all expectations and has now become the latest Dutchman to be linked with a move to United.

Signing a midfielder or two remains United’s priority in this window but after conceding 57 goals last season, the most United have ever let slip in a Premier League campaign, major surgery at the back is also needed.