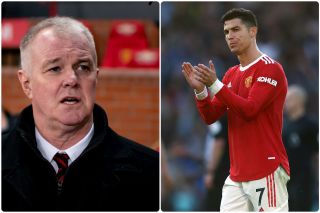 On top of that, the Portuguese superstar won a couple of individual awards but they won’t cushion the disappointing results United, as a team, got on the pitch.

The 37-year-old is expected to stay at Old Trafford for another season to work under Erik ten Hag.

Former United defender Gary Pallister has been raving about Ronaldo’s influence in the team and questions how many goals he would’ve scored in a better team last season?

The answer to that we’ll never know.

Pallister said: “What a player Cristiano Ronaldo has been over the years. I was looking at it last year thinking ‘how is this going to plan out’. He still scored a bag of goals for a team that was struggling.

“If he was playing for a better side, you wonder how many more goals he would have scored. He’s just a machine when he comes to that. I thought his best form was certain towards the end of the season.

“I thought his general play was much better than the early part of the season. I thought he realised he was going to have to work a bit harder. He was prepared to help his teammates and he still scored the goals.”