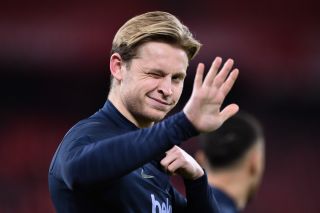 Manchester United are in for a busy summer as Erik ten Hag eyes to revolutionise the club, becoming the latest man tasked with turning United’s fortunes around.

The Dutchman’s predecessors have miserably failed and all of them have succumbed to Ed Woodward’s banhammer but Ten Hag has already impressed supporters with his neat media appearances.

Barcelona’s Frenkie de Jong has been earmarked as one of his prime targets and he was handed a huge boost last week when it was reported that the midfielder was open to joining United.

Talks between United and Barcelona are believed to be underway and Spanish publication AS, via Sport Witness, have now provided an update on the situation, claiming that the deal is now reaching a ‘decisive phase’.

Read more: (Video) Austria goal under Rangnick shows exactly what he failed to do at Man Utd

As per the report, the Catalan club are targetting Valencia midfielder Carlos Soler and that interest is thought to have been driven by the progress made in De Jong’s sale. Furthermore, Barcelona are said to prefer a sale to happen before the end of the month due to their economic struggles.

SN’s verdict…
Quick deals are few and far between when it comes to Manchester United and high-profile deals, in particular, are especially frustrating from a supporter’s standpoint.

The infamous Jadon Sancho saga rumbled on for the best part of two years and last year’s pursuit of Raphael Varane dragged on far longer than it needed to.

One thing’s clear, however, and that’s Ten Hag’s persistence in this case. The 53-year-old is desperate to add De Jong to United’s weak midfield and his potential arrival would be seen as a huge coup.