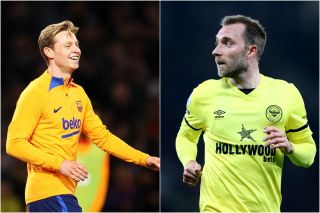 The transfer window officially opened last week and although no deals have been completed at Old Trafford, speculation is neverending and midfielders are thought to be United’s priority.

Nemanja Matic and Paul Pogba, two senior midfielders, will leave the club at the end of this month, leaving a gaping hole in that department.

Speculation this week has been dominated by rumours of Frenkie Jong edging closer to a move to Manchester United but earlier on Tuesday, news broke that the Old Trafford club had made an offer to sign Christian Eriksen.

The 30-year-old is a free agent after signing a six-month agreement with Brentford in January and has attracted the interest of several clubs.

According to The Northern Echo, Tottenham and Newcastle are among the clubs interested in signing Eriksen as Ten Hag makes overhauling the midfield his priority.

As per the report, Ten Hag is hoping to sign both Eriksen and De Jong, in what could be the biggest midfield shake-up at United in many years.

SN’s verdict…
United are in dire need of midfield reinforcements as that area of the pitch has been neglected for far too long. Donny van de Beek, the last midfielder to join the club in 2020, has barely featured.

Matic and Fred were signed in 2017 and 2018 respectively but United have failed to manage the midfield, leaving them in a world of bother.

Adding Eriksen and De Jong to the squad would instantly improve the side and go a far way towards repairing United’s broken engine room.