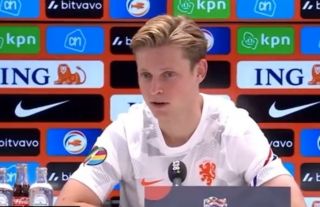 Following Holland’s 3-2 win over Wales in the UEFA Nations League, Barcelona midfield ace Frenkie de Jong was asked about his future amid links to Manchester United this summer.

The 25-year-old produced a masterclass to help the Netherlands defeat Wales.

He showed a great range of passing and was unlucky not to register an assist against the Welsh.

Fellow United target Jurrien Timber was rested for the game.

However, in his post-match briefing, De Jong kept his cards close to his chest when quizzed on a move away from Camp Nou.

Tom Collomosse of the Daily Mail asked the player a question about his future during the post-match press conference.

Frenkie De Jong: 'You’re always flattered when teams show interest in you as a player but I am at the biggest club in the world at the moment and I feel fine there, so no news.’

De Jong replied: “You’re always flattered when teams show interest in you as a player but I am at the biggest club in the world at the moment and I feel fine there, so no news.”

Watch De Jong respond to the question below, courtesy of UEFA

Qs if the quote is legit. Yes. Q from @TomCollomosse pic.twitter.com/A1KZoyAEE6

It’s important to note that De Jong has probably been advised not to discuss his potential switch to United. Moreover, it shows professionalism that he is not flirting with the idea to the press, in a way that would frustrate Barcelona fans.

Remember how Paul Pogba behaved during his second spell at United? It annoyed fans that he regularly spoke about playing his football elsewhere whenever he went on international duty with France. We’re not sorry to see him leave!

The bottom line is Barcelona need to sell players and De Jong is one few they are willing to cash in on.