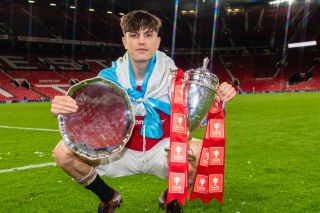 It has been an incredible year for Manchester United youngster Alejandro Garnacho.

Not only did the young forward help win the FA Youth Cup, Garnacho ended the domestic season by collecting the Jimmy Murphy Young Player of the Year award.

Now his stellar performances for Argentina U20s have earned him two awards at the Maurice Revello Tournament.

Garnacho finished the tournament with four goals in as many games.

On top of that, the United teenager was voted as the Revelation of the Tournament.

A second award followed as Garnacho won Goal of the Tournament for his strike against hosts France.

⚽ @agarnacho7 (@Argentina & @ManUtd) wins the Goal of the Tournament 2022 award for this screamer 💥 ! pic.twitter.com/3MsqoyjSEn

The youngster has some time off to rest before linking back up with the club for pre-season training.

Erik ten Hag will have to consider bringing the 17-year-old on tour this summer because United haven’t got many options up front. It’s going to be interesting to see if the club addresses that problem in the transfer market because Cristiano Ronaldo cannot be expected to play every week as he heads into his 38th year.