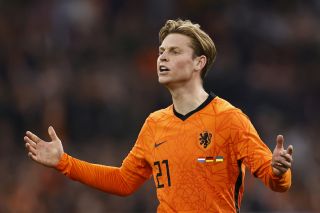 The very notion of Manchester United signing Frenkie de Jong as recent as a few weeks ago would have been fanciful at best. With Ralf Rangnick’s reign turning sour very quickly and the prospect of Europa Conference League football looming, the idea of the Dutchman swapping Catalonia for the red side of Manchester would have rightfully been disdainfully scoffed at.

The lay of the land has changed now, though. Rangnick has been cast aside and Erik ten Hag, the man who brought De Jong’s name to the attention of the footballing world, is the man tasked with restoring United back to the top table. Ten Hag is hellbent on being reunited with De Jong and has launched a relentless charm offensive which, by multiple accounts, has convinced De Jong that his future lies in Manchester, being the face of this new era and is certainly the profile United will have been looking at to replace a certain French midfielder.

This next week could well turn out to be an important one for United and Ten Hag, currently holidaying and probably leaving hundreds of voicemails on Matt Judge’s phone in Ibiza, in more ways than one. It is common knowledge that United dawdled on the Darwin Nunez deal and allowed Liverpool to swoop in. Nunez was seen as a key ingredient in this rebuild, with Cristiano Ronaldo our only dependable out and out striker entering his 38th year. Blowing Nunez was a terrible start, the mantra should be if Ten Hag wants a player every attempt should be made to get them. United need to put down a marker. Liverpool have Nunez, City already have Haaland, and I think De Jong would rival that.

By that token, if United walk away from De Jong, how can that possibly be sugarcoated? De Jong is indisputably Ten Hag’s number one priority and any potential inferior replacement, most prominently Ruben Neves, coming at a similar asking price and United wasting weeks of hard work and effort into getting this marquee deal over the line.

De Jong would revolutionise United’s midfield and is a player I have long admired. I saw De Jong first hand at the Nou Camp on my stag do in February 2020. Although 17-year-old Ansu Fati stole the show with a brace, I have always had a beady eye on midfield watching live football, with my hero being Paul Scholes. I mentioned to my mates at the game that I could see De Jong reach the elite level and contend for the Ballon d’Or. Perhaps that was a bit hyperbolic but his elegance, reading of the game and passing ability has always stood out for me. In recent times, United’s midfield has treated the ball like a hot potato and been out-battled and outplayed by many an opposition. De Jong, on the other hand, takes care of the ball and is incredibly press resistant and should ensure United can control more matches.

Today’s footballing fan can often be guilty of being obsessed with a deep lying midfielder being an outright CDM given the success of the likes of Claude Makelele, even getting the position named after him, and N’Golo Kante. However, one of the better deeper midfielders United have had possessed the traits that make De Jong stand out: Michael Carrick’s reading of the game, positional sense, in-game intelligence and incisive forward passing have been sorely missed in our midfield, I imagine Carrick would have prospered immensely under Ten Hag, he seems to be very much his kind of midfielder.

If United get De Jong over the line, and there is seemingly a growing confidence they can do so, it would surely signal the end of the default McFred duo and you could envisage Fred and De Jong being a dynamic combination behind Bruno Fernandes in a Ten Hag system. To give you an analogy, ‘McFred’ is like trying to get through to payday living off beans on toast. De Jong would be the payday treat of beef wellington with a sticky toffee pudding to finish, it is just an incredible upgrade.

Although the transfer window has only been open officially for 3 days, it already feels like the clock is ticking. It is coming up to five weeks since Gerard Romero broke Twitter by stating that De Jong to United was 95% complete and he will be Ten Hag’s first signing. It has turned into the usual protracted saga that defined Ed Woodward and Matt Judge: Dithering, dallying, stalling to maximise social interactions off the incessant rumours. United jet off for pre-season in a few weeks, with no other departures than the already known free agents and no signings through the door with United needing numerous signings.

United need a good news story after allowing Darwin Nunez to slip through their fingers, they cannot rely on milking the Ten Hag hype forever and actions speak louder than words. The time is now to see if anything actually has changed at United.

Ten Hag is desperate to land De Jong and the player has seemingly had a massive change of heart in being convinced to join. This deal can only be happening down to Ten Hag, his relationship with the player and the huge powers of persuasion he has been using.

Simply put, this deal has to happen now. It will transform our midfield and be an incredible start to our summer spending.

Ten Hag has already made the seemingly impossible become possible, now it’s over to the men in suits above him to deliver his dream signing.