The Red Devils aren’t known for their shrewd and tactical spending and after multiple high-profile signings have failed to live up to expectations, there is now desperate hope among fans that new manager Erik Ten Hag can stop this worrying trend dead in its tracks.

Previous signings such as re-signing midfielder Paul Pogba from Juventus in 2016, bringing in striker Romelu Lukaku from Everton in 2017 and luring Harry Maguire from Leicester City in 2019 all feature in the league’s list of most expensive transfers. 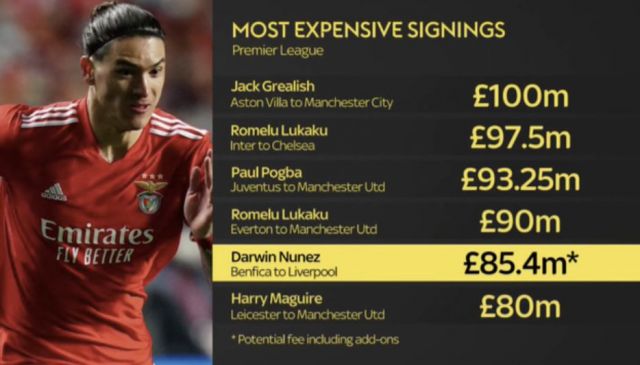 Liverpool’s newest hitman, Darwin Nunez, has also been introduced to the list following his recent £85.4m (including add-ons) move from Benfica.

The top two spots are occupied by Jack Grealish, who moved from Aston Villa to Manchester City last summer, in a deal worth a record-breaking £100m and Lukaku’s recent transfer from Inter Milan to Chelsea.

Looking at the list, fans will probably feel frustrated that after spending over £260m on three players, the club has very little to show for it.

Pogba is now a free agent and looks to be heading back to Juventus, Lukaku is long gone and Maguire’s opinions-splitting performances continue to leave fans and pundits baffled as to how he is the world’s most expensive defender.