Manchester United are likely to target a new winger this summer.

The club will probably first prioritise a new central midfielder and defender but with Anthony Martial close to the Old Trafford exit and Mason Greenwood suspended indefinitely, a new winger is certain to also be on the agenda.

When it comes to potential targets, one player the Red Devils like the look of is Ajax winger Antony.

Following their time together at Ajax, new manager Erik Ten Hag knows the Brazilian well and according to recent reports, the Dutch tactician has been ‘internally discussing’ the possibility of bringing the 22-year-old to Old Trafford.

What has Fabrizio Romano said about Antony to Man United?

That’s according to transfer guru Fabrizio Romano, who while writing in his latest column for CaughtOffside, said: “Antony is a player appreciated by Erik Ten Hag and certainly mentioned in internal conversations with the club this summer, as well as other former players of the Dutch manager – Frenkie de Jong and Jurrien Timber.”

However, despite being highly rated by Ten Hag, the Red Devils, who have tracked the Ajax number 11 for quite some time, have yet to make a formal offer to the Eredivisie champions. 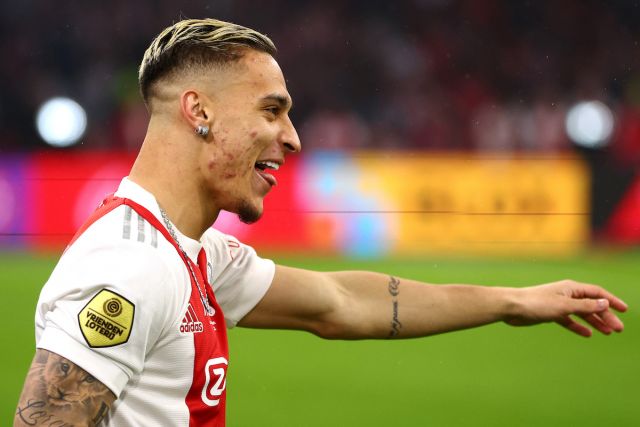 Antony in action for Ajax.

“Ajax are still waiting for official offers so far, and the Brazil international has been observed by Man United scouts even before they hired Ten Hag as manager. Other big sides in Europe are also well aware of his talent and potential,” Romano added.

Since joining Ajax from Sao Paulo back in 2020, Antony, who recently lifted the Dutch title, has gone on to feature in 79 matches, in all competitions, directly contributing to an impressive 42 goals along the way.