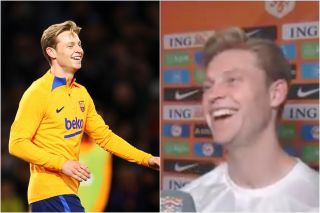 Barcelona midfielder Frenkie de Jong has been strongly linked with a move to Manchester United this summer and the 25-year-old is believed to be open to a move.

Erik ten Hag was unveiled as United’s new manager last month and the Dutchman is understood to have made De Jong his prime midfield target, with that department being their weakest.

The departures of Nemanja Matic and Paul Pogba, two senior midfielders who have been at the club for five and six years respectively, have left a gaping hole.

Earlier this week, it was claimed that Ten Hag is playing a big role in swaying De Jong, with the 53-year-old said to be a ‘major factor’ in his willingness to make the move from Barcelona.

After starring for the Netherlands in the UEFA Nations League, De Jong was quizzed on the endless speculation about his future but the former Ajax star left it all to the imagination.

“Are you leaving the Catalan beaches for the cold of Manchester?” a reporter from ESPN asked De Jong, as seen above.

“No, I think, I can’t say anything,” he responded.

Earlier this week, it was reported that De Jong had privately indicated that he would be open to joining United but with a long transfer window ahead, it remains to be seen what comes out of this one.