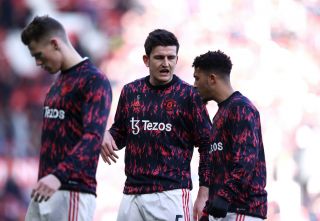 The tabloids reckon David de Gea is the favourite to get the armband next season under new manager Erik ten Hag, while Cristiano Ronaldo is considered another serious contender with one year left on his contract at the club.

Maguire has been subjected to heavy criticism after a woeful campaign last time out. You could see that every week mistakes littered his game, and England fans booed him at Wembley because they didn’t believe his performances at club level warranted a call up.

According to The Mirror, Maguire is set for showdown talks with Ten Hag over his position as club captain.

John Cross writes: “It remains to be seen what the outcome of the talks between the pair will be but Maguire is thought to be desperate to retain the role he has held since January 2020 – only a few months after his switch to United made him the most expensive defender in world football.”

It remains to be seen if Maguire will be the right fit for Ten Hag’s defence next season. United have been linked with a number of centre-backs, including Pau Torres and Jurrien Timber, but the Red Devils have yet to sign any players this summer.

Also, even if Maguire is desperate to retain the role, I would stress that Ten Hag still needs to make the right decision over who is captain next season. It was suggested throughout the season that some players in the dressing up weren’t convinced by the former Leicester City defender.

Let us know in the comments section if you think Maguire should be United’s captain next season?