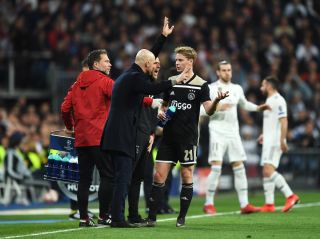 De Jong has a long-term contract at Barcelona but the Catalan club’s difficult economic situation could force them into a sale, with Erik ten Hag keen to reunite with him at Old Trafford.

The pair spent 18 months together at Ajax and enjoyed that spellbinding run to the Champions League semi-finals in 2019 before De Jong was sold to Barcelona.

Earlier this week, it was reported that United were becoming increasingly confident of landing De Jong, with other reports claiming the Dutch international has privately indicated that he would be open to the move.

Ten Hag will name his first pre-season squad at the end of this month and according to reports, he has now asked United to get a deal for De Jong over the line as quickly as possible in order for the midfielder to take part in this summer’s preparations.

That’s according to The Mirror, who add that the 53-year-old has made it clear to the United chiefs that he does not want a prolonged transfer saga – which has been the case for most of United’s big-name signings in recent years.

Furthermore, it’s claimed that Ten Hag would like to know whether a deal for De Jong can be made by the end of next week before deciding whether other targets will be pursued. De Jong is understood to be a high priority on the ‘wishlist’ provided to the United hierarchy by Ten Hag.

SN’s verdict…
Any manager would like his top targets to be signed as soon as possible but with high-profile deals, that’s most often not the case. It does, however, work in United’s favour that Barcelona seem reasonably open to completing a deal swiftly.

Long transfer sagas are frustrating for all parties involved and especially for supporters. Jadon Sancho’s arrival last year was two years in the making and once the announcement was made, there was little jubilation due to the drawn-out process.

Practically, signing De Jong at the earliest opportunity is paramount as the manager will want his new signings to be present when he drills his squad for the first time this summer.