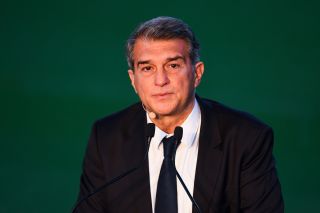 As rumours continue to mount over the future of Frankie de Jong heading into the summer window, Barcelona president Joan Laporta has admitted that his club is prepared to sell a big player to aid their financial crisis.

It’s the biggest hint yet — at least publicly — that Barcelona are ready to cash in on the Dutch star.

“If our financial situation requires the sale of an important player, we are ready for that,” Laporta told Barca TV, as quoted by the Manchester Evening News.

Some might say, Barcelona have been left with no other choice, but I’m not going to give them any sympathy when it’s through their own wrongdoing.

This really should open the door for Manchester United to sign priority target Frenkie de Jong, who has been reportedly convinced to join the Red Devils.

De Jong may seem like another opportunist signing at a time United are crying out for a combative defensive midfielder, but the big plus point from all of this is he’s a player Ten Hag has previously built a successful Ajax side around.

They won the Dutch double and reached the Champions League semi-finals in 2018/19.

The 25-year-old appears to be edging closer to a move to Old Trafford, although Barcelona turned down United’s initial offer.

United are expected to make a fresh offer for the Netherlands international in the near future.