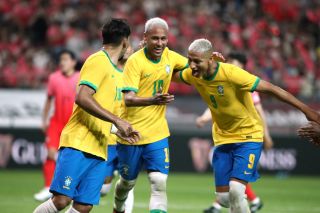 It’s always the case that Manchester United get linked with every player in the transfer market.

I’m not suggesting that there was never any truth in the Richarlison interest from Old Trafford, but he was never going to come on the cheap unless Everton got relegated — which, sadly, didn’t happen.

Now, it sounds like another United-linked striker is on the move — but not to the Theatre of Dreams.

Like other clubs in the Premier League, Tottenham Hotspur are trying to bolster their squad and it doesn’t sound like Harry Kane is going anywhere this summer.

According to The Athletic, the north London club are not believed to have made an offer so far for the 25-year-old, but it is thought that they will make a move for the player at what they deem to be the right price.

The ball will then be in Everton’s court.

David Ornstein of The Athletic adds that the Toffees would be looking to receive a higher fee than the €60 million (£51m) that has been reported, although sources told the publication that they feel they are unlikely to get that sort of money.

This means the options for strikers is beginning to lessen as Darwin Nunez is in talks to join Liverpool.