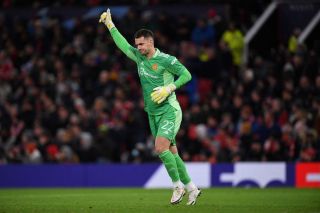 After his return to the club last summer was overshadowed by Cristiano Ronaldo’s homecoming. Yes, he joined as a free agent to play a bit-part role, but we hardly hear anything about Heaton.

The former Aston Villa and Burnley goalkeeper had a good career in the Premier League after coming through United’s academy. Now he’s third choice at United — behind David de Gea and Dean Henderson in the pecking order.

According to The Sun, Middlesborough manager Chris Wilder wants a new No1 and is keen to sign the 36-year-old on a season-long loan.

Heaton may need to ask if — at this stage of his career – he wants to be playing Championship football or stay at Old Trafford as cover.

The report states that Wilder has been dreaming of a reunion with Henderson, after they spent two successful seasons together at Sheffield United, but there’s no way he will drop down to the Championship after already proving himself in the top-flight.

New manager Erik ten Hag will have a decision to make if United were to let Henderson and Heaton go on loan. We might even see the Sam Johnstone rumours resurface.

We could see a lot of changes to United’s goalkeeping department over the next two years.