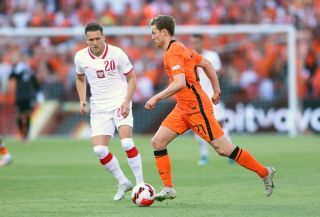 Frenkie de Jong is said to have been convinced that his future lies at Manchester United, with Barcelona set to cash in on the Netherlands star.

The Mirror claims that after talks with former Ajax manager Erik ten Hag, De Jong has changed his tune about moving to Old Trafford — and soon we could be asking whether the new manager can help the deep-lying playmaker realise his full potential in the Premier League.

United’s first bid was rejected by Barcelona, but it is understood that they will go back to the La Liga club with an improved offer.

It is suggested in the Mirror’s report that a fee of £68m plus a bonus package will seal the deal.

Meanwhile, Simon Mullock writes: “Ten Hag explained to De Jong how he is planning to bring the glory years back to Old Trafford.

“And he reminded him how together they won a Dutch league and cup double with Ajax in 2019, when the Amsterdam club came within a whisker of reaching the Champions League final.”

Moreover, De Jong has been advised not to speak publicly about his proposed move to Manchester until both clubs come to an agreement.

At United, over time, the pair could be expected to go all the way in the Champions League.

Next season will be about getting back into Europe’s most prestigious tournament after crashing back into the Europa League.