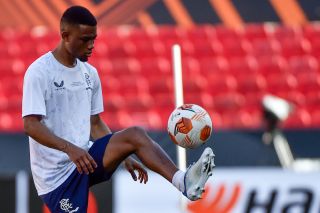 Norwegian journalist Fredrik A. Filtvedt is renowned on Twitter for having the inside track on Manchester United.

He was more frequent with updates prior to Ole Gunnar Solskjaer’s dismissal in November, but he has popped up with a number of stories since, and the latest is on Ivorian winger Amad Diallo’s future.

Filtvedt claims Amad wants playing time and is willing to go back out on loan again. Moreover, he has been in dialogue with new manager Eric ten Hag.

The 19-year-old was signed from the flourishing youth academy of Atalanta, but he has yet to play a continuing role in the first-team of Manchester United.

It’s going to be difficult for Amad to develop unless he is playing regular football and he wasn’t able to achieve that in Scotland.

There is a chance Amad could fit the profile of Ten Hag’s preferred system as a right winger — he’s similar in profile to Ajax star Antony — but the youngster failed to impress during his loan spell at Rangers.

Considering how poorly the squad performed last season, I would like to see Ten Hag give everyone a chance to impress during the pre-season, with every player starting on a fresh page to impress the manager.