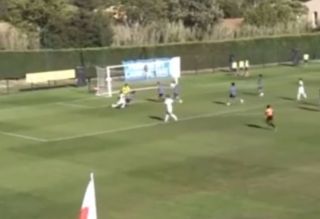 The 17-year-old was recently called up to the Argentina senior squad, but he has yet to make his debut under Lionel Scaloni.

Right now, it’s about proving himself in the youth teams, but Garnacho will be knocking on the door soon – for club and country – if he keeps developing at this rate.

The Manchester United starlet scored the game’s opening goal and provided an assist during Argentina’s 3-2 win.

In the video clip below, you can watch Garnacho’s goal from the stands.

Garnacho was substituted after 75 minutes.

Juventus are reportedly interested in the young forward but United will be offering him fresh terms in the near future.

Despite representing Spain at U18 level, it looks like Garnacho will be switching his allegiances.

Argentina will need to hand him that senior cap sooner rather than later.