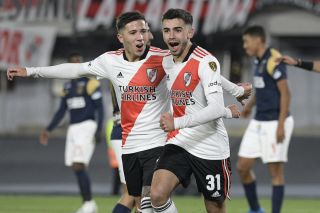 Back in April, Manchester United were linked with River Plate midfielder Enzo Fernandez.

The interest came after Julian Alvarez agreed to join Manchester City. The young Argentine striker has shown at River Plate that he is one for the future – and arguably another player that got away, if you look at it from a United perspective.

However, it was previously claimed that United had sent a scout to watch Fernandez, so River Plate have another young star attracting interest from the Premier League.

The 21-year-old has shone under Marcelo Gallardo and was called up by Argentina last November.

AS claim United, Man City and Real Madrid are all tracking the player.

Now, Fernandez has admitted that he is keen on a switch to Europe, which could alert several clubs across the continent.

“Playing in Europe is a goal, but I’m not anxious to emigrate or anything,” Fernandez is quoted as saying by Ole (H/t Sport Witness).

“That’s what my agent is taking care of; I’m enjoying the day-to-day at River. I’m very happy; I’ve always dreamed of it.

“My dreams are to win the Libertadores with River, to play in a World Cup, which I think would be the maximum and winning it would be a privilege, and to play in Europe.

“The leaders advise my teammates and me. They guide us on the right path; they tell us to work hard with humility.

“They tell us how the path is, they advise us in a good way, and they are always on top of us. Enzo, Armani, Pinola and Maidana are great references and great people. We go hand in hand with them.”

Fernandez is a goalscoring midfielder with box-to-box abilities. He’s got an eye for a defence splitting pass and is known for going on driving runs into the opponent’s penalty area.

It will be interesting to see how many deals United get done this summer because they need to be wise and not overspend on any recruits. A minimum of two new midfielders should be signed before a competitive match is played next season.