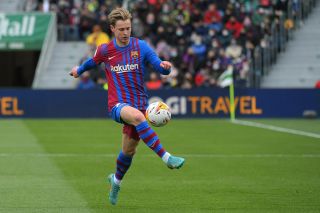 According to The Telegraph, the Red Devils have formally opened talks to sign the Barcelona midfielder.

Jason Burt writes: “United are understood to have opened negotiations for De Jong with an initial offer to Barcelona who remain under severe pressure to stabilise their finances — debts are still placed around £1 billion — despite the demands of coach Xavi Hernandez to improve his squad. Selling De Jong will release funds to improve other areas of the team.”

It has been well documented over the past month that De Jong, 25, is Ten Hag’s leading target in midfield. You can begin to see why as the report stresses that the new manager has identified United’s lack of a creative passer in midfielder as a significant weakness.

However, that doesn’t mean that United shouldn’t sign a defensive midfielder because one will be crucial in order to allow De Jong to play at his highest level.

Ten Hag reportedly accepts that Scott McTominay, Fred and Donny van de Beek have their own qualities, although none of them offer the kind of midfield control that De Jong is capable of providing.

Moreover, the new manager knows more about De Jong than most after managing him at Ajax prior to his switch to Barcelona. He was a key part of the Dutchman’s side that reached the Champions League semi-finals in 2018/19.

The Telegraph also backs up claims that De Jong is now happy to join Ten Hag at Old Trafford, with Barcelona making their desire to sell him clear in recent weeks.

Let us know what you think about signing De Jong in the comments section.