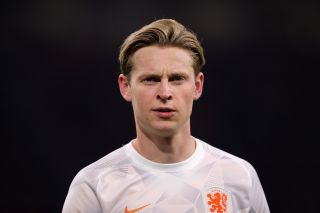 Manchester United are making progress in their bid to sign Frenkie de Jong from Barcelona, with talks over a move believed to have accelerated after the midfielder indicated that he was open to joining the club.

The 25-year-old has been strongly linked with a move to United this summer and there have been encouraging signs over the last few days, with fans growing in optimism over a move.

United are in dire need of strengthening their midfield, with their already thin engine room losing two senior figures this summer as Nemanja Matic and Paul Pogba depart on free transfers.

Ten Hag identified De Jong as a target early on and according to reports, the 53-year-old has played a big part in De Jong’s willingness to join United.

That’s according to the Daily Mail, who say that the lure of a reunion with Ten Hag is understood to be a major factor. The pair are believed to have been close during their 18 months together at Ajax.

As per the report, United are in talks with Barcelona over a deal to sign De Jong and the Old Trafford club have even made their opening offer but a full agreement is yet to be reached. Barcelona want £65m for the Netherlands international and there is a growing feeling that an agreement can be reached.