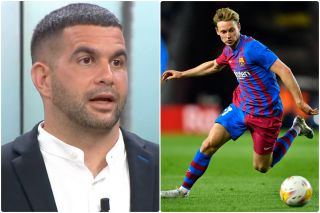 On Thursday night I tuned into El Chiringuito TV.

You could only imagine the fun I had watching it kick off in the studio, while they discussed various matters relating to the biggest Spanish football clubs.

Although I don’t have a word of Spanish, I was still entertained.

My reason for tuning in was to get the latest news on Frenkie de Jong as El Chiringuito tweeted a teaser about the latest scoop before going on air, as seen below.

The tweet included a GIF featuring the Barcelona midfield, who has been subject to links to Manchester United this summer.

Well over 60 minutes after going on air, El Chiringuito journalist Jose Alvarez delivered the update by saying United have made an offer for De Jong worth approximately €50 million, although Barcelona are asking for €80 million.

Alvarez said: “United have made an offer for Frenkie de Jong of about 50 million.”

Of course, this is slightly different to what was reported 24 hours ago by Spanish media.

Marca ran a story stating United had offered slightly more — €60m fixed and an extra €20 in add-ons to Barcelona – but they followed up with another report suggesting that the hierarchy at Camp Nou considered the bid too good to turn down.

We should know a lot more about De Jong’s future by the end of next week.