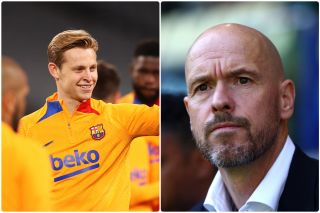 Barcelona want to sign Man City midfielder Bernardo Silva this summer, but a move is unlikely unless they can offload Frenkie de Jong.

While it is understood that the Netherlands international was reluctant to move to a club like United, who are not in the Champions League, but The Mirror’s David McDonnell claims the 25-year-old has accepted Barcelona’s desire to sell him and he is now happy to link up with former Ajax boss Ten Hag at Old Trafford.

This is the first time we’ve heard that De Hong is keen on a move to United but we were never in doubt. It would be ridiculous to think that Ten Hag hasn’t been in regular contact to find out.

The report states that both De Jong and Silva are valued at £75m, and the Spanish media believe an offer has already been made by United for the former.

It looks like United will miss out on Benfica striker Darwin Nunez, so the board will be thinking about good PR and they’ll want to announce something soon.

Hopefully they can get a deal for De Jong over the line and Ten Hag can start to reshape United’s midfield without Paul Pogba and Nemanja Matic.

It would be great to see City lose on of their best players, too.