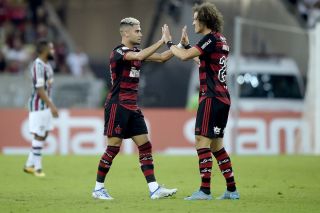 Andreas Pereira’s future is up in the air at the moment.

While ESPN claims the Brazil international will be given an opportunity to impress new manager Erik ten Hag during the pre-season tour this summer, it is also noted that Turkish giants Fenerbache have registered an interested in the player.

Pereira spent last season on loan at Flamengo, but a permanent move collapsed in recent months. Now he looks set to return to Europe in a bid to cement a place in someone’s team.

Meanwhile, Ten Hag is believed to be keen to give Pereira chances against Liverpool, Melbourne Victory, Crystal Palace, Aston Villa and Atletico Madrid during the summer. That could be a lifeline for his United career, but many fans think that ship has sailed. A long time ago, too.

Sources have told ESPN that Pereira is intrigued by the possibility of linking up with manager Jorge Jesus. The prospect of regular football at Fenerbahce may be too good to turn down.

Another club looking at Pereira is Benfica – at the same time United are targeting their striker Darwin Nunez, who is edging closer to a move to Liverpool.

United should test the waters and see how serious Benfica are about signing Pereira.

One response to “Turkish giants interested in Andreas Pereira, while Benfica consider midfielder”