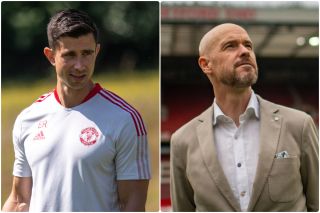 Eric Ramsey has made the shortlist to become Barnsley’s next manager but Manchester United want him to stay as part of Erik ten Hag’s backroom staff.

According to the Manchester Evening News, United are aware of the interest in the 30-year-old coach, but the club has made it clear they are keen to retain his services next season.

On social media, Ramsey was subject to heavy criticism by fans this season because he was appointed to focus on set-pieces and technical skills a year ago. I don’t think any of you need reminding of how few goals we scored from corners this season – nowhere near enough.

The report stresses that United still want Ramsay to work with Ten Hag and they will speak to the coach about his future if an approach is made by Barnsley, who were relegated to League One last season.

It goes without saying that brining Barnsley back to the Championship will be a huge task and Ramsay could get a better job if he sticks around Carrington for another few years.

Moreover, staying at United would give Ramsay the opportunity to work with and learn from not just Ten Hag, but his two assistants Mitchell van der Gaag and Steve McClaren.

That’s a really good opportunity for a young coach.

Barnsley can be wait for another few years.