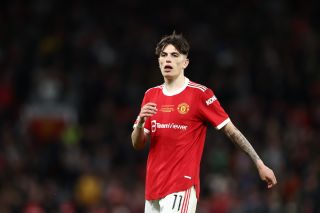 Manchester United have been handed a huge boost as they are now confident of tying exciting youngster Alejandro Garnacho down to a new contract at the club, according to reports.

The 17-year-old has enjoyed a breakthrough year at United, making his debut in May’s 1-1 draw with Chelsea at Old Trafford before scoring twice in the FA Youth Cup final against Nottingham Forest. Garnacho’s heroic brace secured United’s first FA Youth Cup triumph since 2011.

According to the Manchester Evening News, United are now confident of reaching an agreement with Garnacho over renewed terms following his stellar campaign.

Talks between the club and his representatives are believed to be progressing well, with United said to be keen to reward Garnacho for his efforts.

Earlier this week, there were suggestions that Garnacho was being courted by Juventus but the news of a contract extension being in sight will come as a huge boost to United.

Garnacho trained with the first team for the latter part of this season and the young Argentinian will be desperate to impress Erik ten Hag this summer. The exciting midfielder is expected to be named in the Dutchman’s pre-season squad for their tour of Asia.