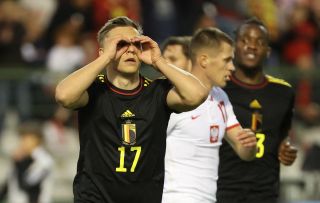 Manchester United are in for a busy summer in the market this summer, with six players already confirmed to be leaving the club and further outgoings expected.

Supporters will focus on the incomings, however, with Erik ten Hag likely to make wholesale changes to the squad he has inherited from Ole Gunnar Solskjaer.

So far this summer, the focus seems to have been on midfielders and defenders, with Frenkie de Jong and Jurrien Timber among the players to be frequently linked with a move to Old Trafford.

Now, another candidate has been suggested to be of interest to United, with Brighton & Hove Albion midfielder Leandro Trossard linked with a move. According to RTBF, via Voetbalkrant, United are interested in the 27-year-old as Ten Hag eyes an overhaul of the squad this summer.

Trossard is a versatile player and although he prefers to figure in a role behind the main forward, he is also used as a false nine by Graham Potter.

The former Genk star has emerged as one of Brighton’s best players and he’s now a regular for Belgium, with his most recent showing against Poland including a two-goal haul.

SN’s verdict…
As things stand, signing a defensive midfielder is a priority for United and Trossard is unlikely to be high on their wishlist. Furthermore, Bruno Fernandes’ name on the team sheet is set in stone and his new contract, signed earlier this year, puts him in a secure position.

Trossard does, however, only have one year remaining on his contract at Brighton and a move could be sealed at a cut-price deal. He featured 34 times in the Premier League this season, scoring eight goals and assisting a further three.