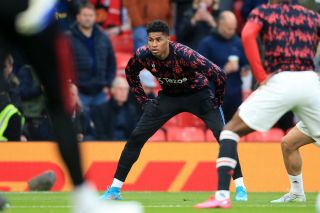 The last 12 months have been challenging for Marcus Rashford, who now finds himself in an uphill battle to reclaim his position in the United side under Erik ten Hag.

The 24-year-old has been under intense scrutiny since last summer’s European Championship and his recent recovery from two serious injuries hasn’t helped the cause.

Ralf Rangnick often preferred both Jadon Sancho and Anthony Elanga over the Wythenshawe-born forward and with one year remaining on his current deal at Old Trafford, there has been speculation of whether his future lies elsewhere.

Earlier this week, there were suggestions that Tottenham had held discussions over a move for Rashford but a transfer was seen as unlikely.

Now, journalist and transfer specialist Fabrizio Romano has delivered his verdict on the situation, insisting he doesn’t expect Rashford to join Tottenham this summer.

“I don’t expect Marcus Rashford to join Spurs, he can bounce back under Erik ten Hag,” Romano wrote in his CaughtOffside column.

“There’s been a lot written about Marcus Rashford in the last few days, and I can only tell you what my current understanding of the situation is.

“So far I am not aware of a Tottenham proposal for Marcus Rashford. He is certainly a player monitored by several clubs, but there is no negotiation with Manchester United.

“Also my understanding is that Rashford has not decided to leave the club and will soon speak directly with Ten Hag to understand his future, both his role in the team and also in contractual terms (he’s out of contract in June 2023 but with an option to extend for further season).

“Should Marcus remain at Man United, I am sure that an intelligent and talented manager like Ten Hag can help him to be back at top level. It could be good for him to stay because I think there’s a real chance he can develop his game and improve under the new manager.

“Things could change, but at the moment I’d expect a United stay is the most likely outcome for Rashford.”

SN’s verdict…
It would be silly to turn on a player like Rashford after one poor season. In truth, this year is his only sub-par campaign and it must be taken into consideration that he missed the first two months with serious shoulder and ankle injuries.

In the 2020/21 season, Rashford notched up an impressive 21 goals and assists despite being injured for most of the year. His form has taken a dramatic turn for the worse but history shows that he is a player worth taking a shot at.

It’s not a gamble for United and Rashford will be eager to prove the doubters wrong.