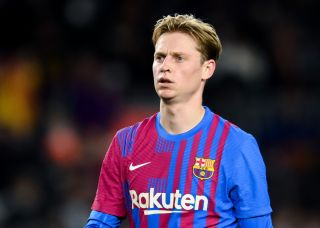 Manchester United are hot on the heels of Frenkie de Jong, who could leave Barcelona this summer. The Dutchman is regarded as one of Europe’s best midfielders but could be sacrificed to strengthen the cash-tight Catalans.

Earlier this month, it was claimed that Manchester United had opened official talks with Barcelona over De Jong, with the midfielder identified as one of Erik ten Hag’s top targets this summer. The former Ajax coach knows De Jong well, having worked with him for two seasons before Barcelona came calling in 2019.

More recent claims suggest that an offer has already been made but these rumours have now been dismissed, with Mundo Deportivo reporting that Barcelona are yet to receive an official proposal for the 25-year-old.

As per the report, De Jong’s future remains up in the air and the player is no longer considered a priority at the club, with a potential sale now allowing them to target Manchester City’s Bernardo Silva.

The Barcelona offices are now awaiting an offer from Manchester United or any other club but it’s also stated that the midfielder would prefer to join a Champions League club, with United missing out on Europe’s fine dining table.