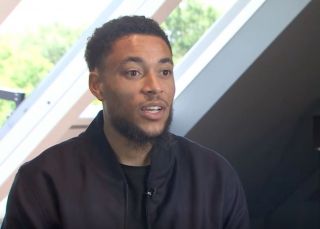 The winger has been linked with a return to the Premier League and says he has some unfinished business in England.

After becoming Villarreal’s highest ever Champions League goalscorer in his first season, rumours emerged that United were looking at the former Bournemouth attacker as an option in the transfer market.

Danjuma recently said he was aware of interest from Liverpool but, in a new interview, the Netherlands international made it clear there is no formal interest.

He made it very clear that is he not pushing for a move away from Villarreal and spoke about what it’s like to be the subject of constant transfer speculation.

“It’s a bit a funny story, to be fair,” Danjuma told Sky Sports News. “We’ve all read what has been said in the press, but I am a quick learner.

“I did an interview in Holland saying I’m aware of the interest. They asked me if I was aware of it and I am, as everyone is. I’m aware of it, you are aware of it because it has been in the press. My phone literally went off all the time.

“In that sense, I am aware of it because of the media but I never actually confirmed the interest from Liverpool because the only one that confirms it to me is my team.

“I haven’t heard anything from my team and as it stands now, I am enjoying my football at Villarreal. I am really happy there. We had a fantastic season.

However, the clip below shows when Danjuma suggests he has unfinished business in England (H/t Football Daily).

🗣 “There’s definitely unfinished business for me.”

It is understood that United are keeping tabs on the Dutch winger.

The Manchester Evening News claims United are fond admirers of Danjuma a year after he was considered as an alternative to Jadon Sancho.

On top of that, the player has a €45m release clause which can be active this summer.

Danjuma joined Villarreal for £25m last summer, so the Spanish club could still pocket a healthy profit from Danjuma’s sale, although I am sure Emery wants him to stay for one more year at least.