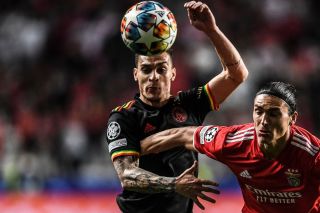 There has been a number of reports suggesting Erik ten Hag will raid his former club Ajax in the transfer market.

In defence, Manchester United have been linked to Lisandro Martinez and Jurrien Timber, although both players have been known to play defensive midfield roles under the Dutch coach.

Brazilian winger Antony is another name that has been frequently mentioned in the gossip columns. There’s no denying that Ten Hag needs find a solution for the right wing, but the club has already paid lots on money to sign Amad Diallo and Facundo Pellistri, with neither of them having any impact on the pitch signing arriving at the club.

According to Goal Brasil, Antony’s entourage have flown to Europe to speed up a move to United.

The report also claims that the 22-year-old would cost United in the region of £51 million.

Antony spent two years under Ten hag at Ajax and could be set to join him at Old Trafford in the near future.

This may depend on whether we get primary targets or not. With Liverpool set to win the race for Darwin Nunez, United could miss out on a second target they viewed as a goalscorer for the foreseeable future. The first was Man City bound Erling Haaland.

At this point, I would be shocked if Timber didn’t join United – but we haven’t heard enough about the apparent interest in Martinez.

Antony would be an exciting signing for the right flank, but what does that say about Amad and Pellistri? They can’t all have brilliant careers at United.