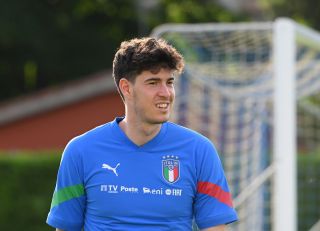 Manchester United are almost certainly going to sign a defender this summer, with a new centre-back believed to be high on the club’s wishlist.

Last year’s acquisition of Raphael Varane has not gone as planned, with the Frenchman struggling with continuous muscle injuries. Harry Maguire also endured a catastrophic season, with the United skipper far from secure in his place in the side.

Ajax defender Jurrien Timber has been heavily linked with following Erik ten Hag to Old Trafford but recently, United have been paired with Inter star Alessandro Bastoni in the press.

The 23-year-old is a regular for Inter and has been tipped to be Italy’s next big-name defender, with stalwarts Giorgio Chiellini and Leonardo Bonucci reaching the end of their careers. Bastoni has two years remaining on his contract at Inter and is valued at a whopping €60m by statistical website Transfermarkt.

The defender, who falls into the category of defenders more than comfortable with the ball at their feet, has now commented on speculation about his future.

“I have two years of my contract with Inter, so I am relaxed. The club hasn’t told me anything,” he told RAI Sport, via journalist and transfer specialist Fabrizio Romano.

“I am just waiting to go on vacation after this and then start pre-season with Inter.”

It remains unclear whether Ten Hag will have the spending power to splurge big on a defender this summer, with midfield believed to be the area treated with the greatest urgency in his first transfer window.

Barcelona midfielder Frenkie de Jong has been strongly linked with a move to United whilst Chelsea star N’Golo Kanté has emerged as a surprise candidate.

The 31-year-old has just one year remaining on his Chelsea contract and United could be ready to pounce after turning down the chance to sign him in 2016.