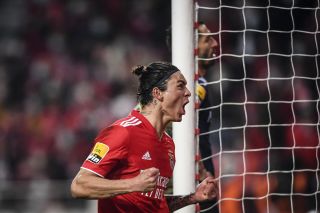 While it has been widely reported that Manchester United and Liverpool are interested in signing Darwin Nunez, but the Reds are telling the media that they will not get drawn into a bidding war for the Benfica striker.

According to the Manchester Evening News, United are reluctant to get drawn into a bidding war with their rivals to sign the Uruguayan goalscorer.

This comes after Alex Cook suggested United put Nunez on the backburner to focus on Barcelona midfielder Frenkie de Jong.

Unlike the Scousers, we are unable to offer Champions League football and that could be an issue with a player like Nunez, who scored six goals in the competition for Benfica last term.

The Athletic claims Liverpool are preparing to make a club record offer to sign the forward.

The report states: “David Ornstein reported in April that the scrum of elite sides gathering to register an interest has been streamlined slightly, with Manchester United, Chelsea and Paris Saint-Germain among the contenders to sign him.

“West Ham United failed with a bid in January. Newcastle United tried too. His former agent (more on that shortly) suggested that Atletico Madrid were the club who had shown the most interest.”

Nunez could cost close to £100m this summer and Benfica know that reported interest from clubs like United and Liverpool will only help drive up interest in the player and probably his price tag too.

The 22-year-old would be an exciting signing for United because we need a younger goalscorer than Cristiano Ronaldo. Moreover, we shouldn’t be so reliant on the Portuguese veteran to score our goals every week.

It would be massively beneficial to Ten Hag if the Dutchman can get Marcus Rashford back to his best in front of goal. That might cushion the blow of potentially missing out on Nunez this summer.

Liverpool will see Nunez as an attractive option if they lose Sadio Mane to Bayern Munich.