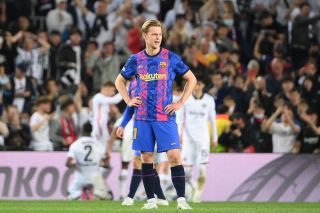 Manchester United have reportedly made an offer to sign Barcelona midfielder Frenkie de Jong, according to reports in Spain.

The 25-year-old endured a difficult season in Spain but could form a reunion with Erik ten Hag at Old Trafford. De Jong played under the Dutch coach for two years at Ajax and was part of the 2018/19 side that reached the Champions League semi-finals.

Multiple reports have claimed that Ten Hag has made De Jong one of his priority targets this summer, while Barcelona manager Xavi has made it clear that he’d like to keep the player.

According to Marca journalist Luis Rojo, United have offered €60 million fixed and an extra €20 million in add-ons to Barcelona.

Luis is a reliable reporter from Marca when it comes to news about Barcelona.

Moreover, he was one of the first reporters to question De Jong’s future at the Camp Nou this year.

While De Jong would be an exciting midfield addition for Ten Hag, he is not the defensive midfielder we are crying out for. I am also trying to hold back any excitement until he agrees to join the club.

In other transfer news, United look set to miss out on Darwin Nunez as Liverpool edge closer to the Uruguayan striker.

Back to the drawing board on the striker front.