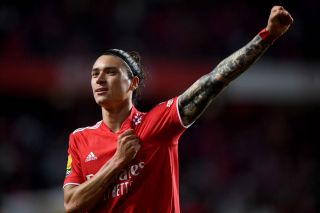 We previously described the Uruguayan as the most wanted striker in Europe, especially after Erling Haaland edged closer to Manchester City, and today it was suggested that the Red Devils would not entertain a bidding war for the 22-year-old.

Nunez caught the eye of top clubs last season with 34 goals in 41 games across all competitions, and he could be ideal to give United fresh blood up front as Cristiano Ronaldo approaches the final days of his playing career.

The latest update from ESPN suggests United are ready to rival Liverpool for Nunez this summer. There is a belief that a deal would cost £80 million, despite Benfica previous insisting that they wanted as much as £100m.

Earlier today, it was reported that the Reds do not want to get involved in a bidding war for the player.

Rob Dawson, who covers United for ESPN, adds that the Reds feel Nunez could be persuaded to move to Old Trafford over Anfield even though he’s thought to be looking to join a club with Champions League football.

This could be a tad optimistic but maybe the Uruguayan could be sold Erik ten Hag’s project at United.

In contrast to Liverpool right now, United had one of their worst seasons of modern times, finishing sixth in the league and only managing to reach the Champions League last 16.

They won the FA Cup and Carabao Cup.