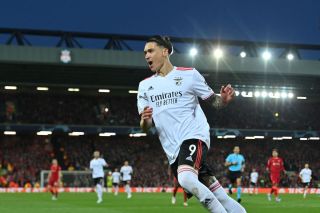 Erik ten Hag could have suffered his first setback in charge of Manchester United, with reported transfer target Darwin Nunez reportedly the subject of interest from rivals Liverpool.

United are expected to sign a striker this summer, with Edinson Cavani’s departure already confirmed and outcast forward Anthony Martial expected to leave the club. There is also little clarity on whether top scorer Cristiano Ronaldo will stay for a second season.

Nunez is believed to be one of the club’s top targets this summer, with reports confirming last month that United had registered serious interest in the Uruguay international.

Now, the Old Trafford club have suffered a huge blow in their pursuit of Nunez, with the Daily Mail reporting that Liverpool have held discussions with Benfica over a move.

As per the report, Liverpool are ready to smash their transfer record to seal his arrival and are reportedly ‘determined’ to sign the 22-year-old, who scored in both meetings between the sides in this season’s Champions League. Furthermore, Nunez is believed to be keen on joining the Merseyside club. A deal to sign the exciting prospect could set Jurgen Klopp’s side back £85m.

SN’s verdict…
As far as forward targets go, not many have been linked to United as vigorously as Nunez. At the time of writing, he seems to be the club’s prime target.

Should he join Liverpool instead, who hold the bargaining chip of being to able Champions League football, it would be a huge blow to United’s plans this summer.

Irrespective of whether Ronaldo stays at the club, fresh blood is needed in the frontline and Nunez had been identified as the perfect player to do that with.