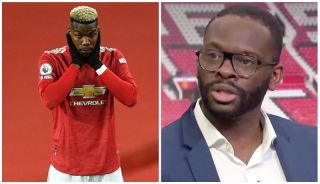 Manchester United officially announced last week that the Frenchman will be leaving the club at the end of June.

Pogba turned down an offer to stay at United, but the 29-year-old looks set to return to Juventus this summer.

Speaking to Sky Sports about Pogba’s exit, Saha said: “I am disappointed, sad really. He’s a top player and someone I rate really highly. I can understand here there is frustration on both ends.

“At the same time it’s a transition for everybody. There are no more excuses, for Paul as well he looked for a platform when everything would be in his way and nothing was like as he imagined at Manchester United.

“The club really should’ve looked forward for some achievement from that [transfer] but to let Pogba leave for zero is definitely bad business. Strong decisions need to be taken going forward.

“The board have thought carefully about this and need of change and more respect for the institutions. Pogba hasn’t had the effect we had all hoped, so it’s time to clean up the situation where players are unhappy or unsettled.”